by Pinchas Cohen
in Analysis
Reading Time: 6 mins read
A A

The outperformed every other major currency yesterday and early today, with equities trading in the green in Europe and the US but turning south today in Asia. In our view, this was because critical data are on the schedule today, with the UK CPIs already out and the Canadian inflation numbers coming next. That said, the day’s highlight may be Fed Chair Powell’s before Congress later in the day, as participants try to understand whether a triple hike will be the case at the next FOMC gathering.

The US dollar traded higher against all the other major currencies on Tuesday and during the Asian session Wednesday. It gained the most versus , , and in that order, while it eked out the least gains versus and .

The strengthening of the US dollar and the Swiss franc, combined with the weakness in the risk-linked Kiwi and Aussie, suggests that markets may have turned to risk off. However, the relative strength of the Loonie and the weakening of the yen point otherwise.

Thus, we prefer to turn our gaze to the equity world to get a clearer picture of the broader market sentiment. There, we see that all but one of the major EU indices traded in the green, except Spain’s .

In the US, appetite improved more, with all three of Wall Street’s main indices gaining more than 2%. However, in our opinion, this was a catchup to Monday gains in other regions, as Wall Street stayed closed on the first day of the week. Today in Asia, sentiment deteriorated. With no clear catalyst behind the further gains in stock markets, we would assume that this was due to last week’s massive selloff inviting bargain hunters into the game. And in our view, Asia saw participants reducing their exposure due to the UK and Canada CPIs coming out, as well as Fed Chair Powell’s testimony, which is scheduled later in the day. Anything suggesting more aggressive tightening, thereby adding to fears over a global recession, is negative for risk appetite. 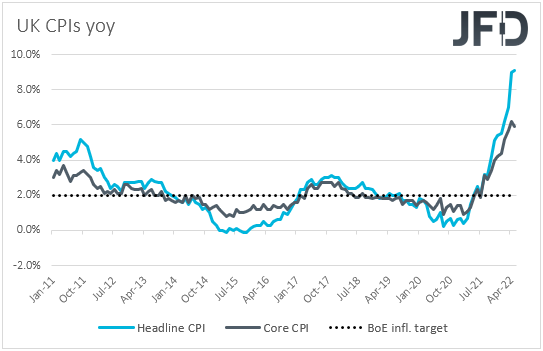 Last week, the interest rates by 25bps as was widely anticipated, enhancing the notion that it will follow a slower rate-hike path than most other major central banks. However, officials said they are ready to act “forcefully” if necessary, with market participants lifting their pricing. They now see interest rates near 3% by year end, expecting at least 50bps at each of the September and October meetings.

Accelerating headline inflation may have added credence to that view, but we are reluctant to call for a trend reversal in the . The BoE warned that the economy may have contracted in the second quarter. Thus, more data revealing an ugly economic picture could prompt market participants to scale back their hike bets, resulting in another round of selling in the British currency. The PMIs on Thursday may be of those releases. 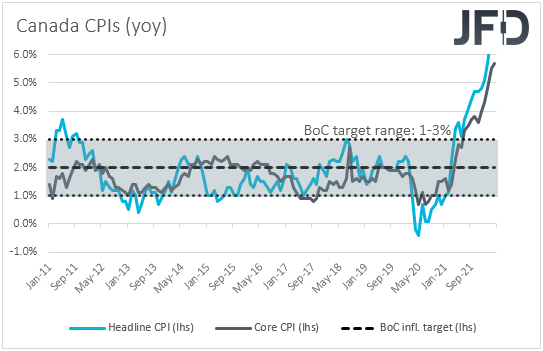 At its latest gathering, the BoC hiked by 50bps, its second double hike in a row, taking its benchmark rate to 1.5%. That said, this was anticipated and fully priced in. So, in our view, the most important takeaway from that gathering was that the bank reiterated its willingness to “act more forcefully if needed.”

Thus, accelerating inflation could add credence to that view and help the Loonie gain at the time of the release, even if the core rate declines somewhat. After all, that rate remains well above the 2% midpoint of the bank’s target range of 1-3%.

Later in the day, Fed Chair Powell will deliver his semi-annual testimony before Congress. He will present the same testimony on Thursday as well. Last week, in line with the market pricing, the Fed raised interest rates by 75bps. The new dot plot was also very close to the path priced in by the financial community.

The median dot for 2022 was at 3.4%, up from 1.9%, implying another approximately 175bps by the end of the year. In other words, the market has been pricing in another triple hike in July and two more doubles after that. 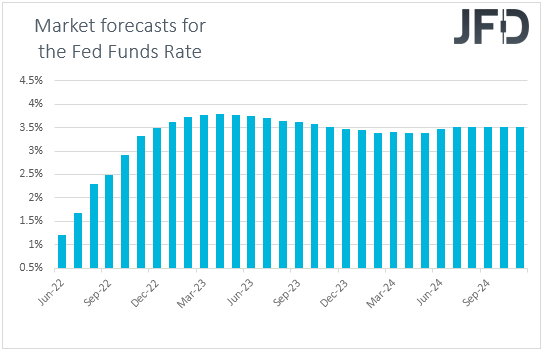 However, at the following the decision, Chair Powell said that at the next meeting, they might hike either by 50 or 75bps, depending on incoming data. In our view, this meant that a 75bps liftoff is not a done deal as the market pricing has been suggesting.

Thus, with that in mind, we will monitor his testimony for hints and clues as to how likely a 75bps hike is at the next meeting. The dollar could strengthen if he appears more confident about another triple hike, while the opposite may be true if he keeps highlighting the probability that 50bps could also be the case.

traded lower yesterday, and today, it fell below the 0.8975 barrier, marked by the inside swing high of Jun. 14. Overall, the pair has been coming under selling interest after hitting the latest ceiling of 0.9130 and this has been the case since May 11. Therefore, we see decent chances for the pair to keep drifting south.

We will start examining the bullish if we see a clear break above the aforementioned key territory of 0.9130. This could confirm a very important forthcoming higher high on the daily chart and may first target the high of May 3, at 0.9175. A break above that hurdle could carry larger bullish implications, perhaps allowing advances towards the high of May 4, at around 0.9255. If that area doesn’t hold either, then we could see them bulls climbing towards the peak of Apr. 20, at 0.9350.

USD/JPY edged further north yesterday, breaking above the peak of Jun. 14, entering territories last tested in 1998. The pair is also well above a tentative upside support line drawn from the low of May 30, and thus, we will consider the picture to have been overly bullish.

Even if we see a small correction due to the overstretched rally, we expect the bulls to retake charge soon, perhaps turning the 135.60 to a support. A forthcoming bullish run could take the rate up to the 137.35 zone, marked by the inside swing low of July 1998, and if it doesn’t hold then we could see extension towards the peak of September of that year, near the round figure of 140.00.

In our view, a bearish reversal could come upon a dip below 131.00, marked by the inside swing high of Jun. 3. The rate will be well below the aforementioned upside line, and also below the key low of Jun. 16, something that may encourage the bears to dive towards the low of Jun. 2, at 129.50. If they are willing to stay in the driver’s seat, we may see the fall extending towards the 128.15 area, the break of which set as a next target the low of May 24, at around 126.35.