Kwarteng said on Sunday that there was “more to come” and insisted that Friday’s announcement of £45bn in tax cuts was just the start.

After the announcement the pound dropped to its lowest point since 1985, and many Tory MPs have privately expressed fears that sterling will take another pummelling this week. Leading economists and investors warned that the Bank of England might have to introduce emergency interest rate rises to prop up the currency.

Kwarteng told the BBC’s Sunday with Laura Kuenssberg: “We’ve only been here [in government] 19 days. I want to see, over the next year, people retain more of their income.”

Kwarteng argues that tax cuts will bolster growth, but investors took fright on Friday after he announced a massive expansion of government borrowing, including an extra £72bn of extra debt before next April.

A succession of Tory grandees have expressed doubts about his plan.

Lord Ken Clarke, a former chancellor, denounced the idea that tax cuts for the wealthy made them work harder. “I’m afraid that’s the kind of thing that’s usually tried in Latin American countries without success,” he said.

Meanwhile George Osborne, another former Tory chancellor, told Channel 4’s Andrew Neil Show that he had concerns, although he found it refreshing that prime minister Liz Truss and Kwarteng were “conviction politicians”.

“You can’t just borrow your way to a low-tax economy,” he said. “Fundamentally the schizophrenia has to be resolved. You can’t have small-state taxes and big-state spending.”

Many Tory MPs fear that Kwarteng’s borrowing spree will fuel inflation and force up interest rates, with higher mortgage payments swallowing up the effect of the income tax cut.

“The market reaction on Monday will set the tone for the week ahead,” said one former minister.

Some market participants said rapid interest rate rises may be needed to stave off inflationary pressure and shore up confidence in sterling.

Sushil Wadhwani, an asset manager and former Bank of England policymaker, said it was “highly likely” that the pound would come under “significant downward pressure” in the coming days.

“If I were still at the BoE, I would be tempted to announce an extra meeting in a week,” Wadhwani said.

Mohamed El-Erian, president of Queen’s College, Cambridge and an adviser to leading investors Allianz and Gramercy, said: “There will be a significant expectation of the Bank of England doing something, being more hawkish.”

Adam Posen, president of the Peterson Institute and a former BoE Monetary Policy Committee member, said: “The key issue is that the Bank of England at this point has to take the pound’s value into account when setting policy in a way it hasn’t had to since 1992.”

He said the central bank might be forced by market volatility to act before the next scheduled MPC meeting in November. Asked whether it would hold an emergency meeting, the BoE declined to comment.

The Treasury tried to reassure markets that the new chancellor would not incur even more borrowing by increasing public spending before the election. “While driving economic growth and tackling high inflation, we will continue to take a responsible and disciplined approach to spending,” it said in a statement.

“It’s more important than ever that departments work efficiently to manage within existing budgets, focusing on unlocking growth and delivering high-quality public services,” the Treasury said. “The government is rightly focused on the immediate priorities of the economy, energy and the health service this winter. We will announce further details on our approach to future spending in due course.” 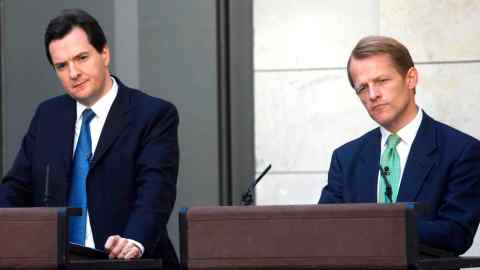 Tory MPs speculated that the chancellor could unfreeze personal tax allowances and thresholds in a full Budget expected to take place next year, along with removing the 60 per cent effective tax rate on earnings between £100,000-£125,000 caused by the tapering off of the personal allowance.

Speaking at the start of the Labour conference in Liverpool, party leader Sir Keir Starmer said he would reverse Kwarteng’s decision to scrap the 45 per cent additional income tax rate on earnings above £150,000 but would retain the cut in the basic rate from 20 per cent to 19 per cent.

Work by researchers Andy Summers and Arun Advani at the London School of Economics and Warwick University based on data from tax returns suggested that 46 per cent of the gains from the abolition of the 45 per cent rate would go to people with annual incomes over £1mn.