The S&P 500 Is Following A Deceptively Simple Path

by Pinchas Cohen
in Analysis
Reading Time: 3 mins read
A A

The investment environment has been uber-complicated (I won’t bore you with a list of political and economic crosscurrents), yet there’s been no reason to overcomplicate things. The has been taking a deceptively simple, even predictable path. Let’s call it the KIS (keep it simple) path.

The chart below, which I’ve been following for many weeks, outlines the KIS path:

The decline from the January top has carved out a pattern called expanding diagonal (purple lines).

U.S. Dollar Falls to a 6-Month Low as Investors Focus on Nonfarm Payrolls

Within that expanding diagonal, the S&P is tracing a discernible 5-wave structure (for those who follow Elliott Wave). Wave 5, the final leg of this decline, is currently underway.

If the KIS path continues to play out, we should still see lower prices with the next support around the green lines.

There are a ton of other possible Elliott Wave interpretations, but this one’s been working. There is no need to fix what’s not been broken, at least now.

It’s great when technical patterns play out, like painting by numbers. But I always look at a spectrum of indicators to see what the weight of evidence says and to be prepared when a ‘splat’ happens.

Here is just one of many developments I follow:

Market breadth is horrible, and when it comes to markets, ‘horrible’ is usually when mean reversion is not too far away. Please note; I’m not saying it’s here already; I’m just trying to peek around the next corner.

Mean reversion happens in all areas of the social fabric. For the stock market, it means that things have gotten so bad it’s actually good.

Why? The market will likely soon run out of sellers (at least temporarily) needed to drive prices lower.

I tested this theory by identifying other times when stocks sold off, like last week, from Tuesday to Friday. 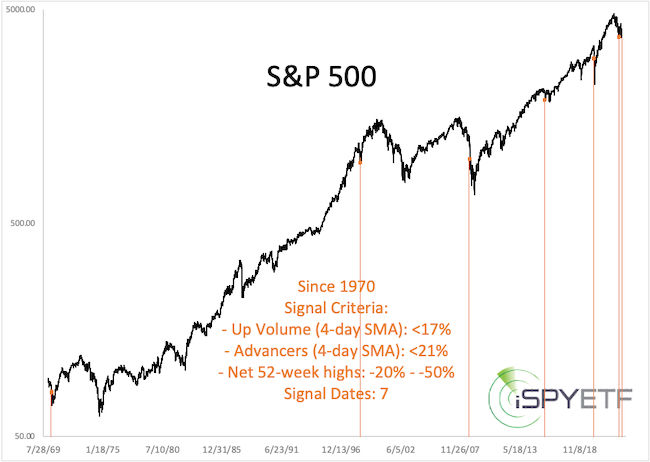 Going back to 1970, there were only six other signal dates (precedents). Three of those occurred in market meltdowns, where the price fell quickly, but post-signal losses also recovered.

Market breadth is horrible and nearing the ‘it’s so bad, it’s good’ zone, where weak hands tend to get flushed out. However, the KIS path and similar precedents caution that a quick meltdown is possible before a low is in.

Once the S&P 500 carves out a bottom, perhaps around 3,400, we should see a sizable buying opportunity. I’ll discuss why (based on the weight of evidence) in an upcoming article.

Hong Kong home prices drop 2.3% in August to lowest in 3-1/2 years By Reuters

Chevron to resume Venezuela oil production as US eases sanctions

Rate hikes to slow, but adjustment just beginning By Reuters

Amazon layoffs to extend into 2023 By Reuters

The Fed’s Thanksgiving tonic By Reuters