Trading Desk Notes: Something Will Break As Central Banks Tighten Into A Recession

by Pinchas Cohen
in Analysis
Reading Time: 10 mins read
A A

The ECB finally “grasped the nettle” on , but their (to raise interest rates by 0.25% next month and to also stop buying bonds) were tepid relative to , so the fell sharply vs. the USD, interest rates jumped, and widened dramatically.

On Friday, the CPI report was , and consumer sentiment plunged to a record low.  surged higher, credit quality spreads widened, and the soared while tumbled.

Consumer spending is ~70% of American GDP. Consumers are more worried about inflation than anything else. Previously, inflation was mostly confined to financial assets and real estate, but now inflation is hitting consumer necessities like food, fuel and electricity. Consumer spending has been holding up, but is rising sharply.

I expect consumer spending to fall sharply as Central Banks raise interest rates. The economy will slow faster than CBs currently expect, corporations will struggle to maintain margins, and PE ratios will shrink.

A few weeks ago, some analysts were toying with the thought that “peak tightening” had come and gone and that the market had “over-priced” how aggressive the Fed would be.

By the end of this week, sentiment had shifted to the idea that (to para-phrase BofA’s Michael Hartnett) “In short, the inflation shock isn’t over, and the rates shock is just starting (the growth shock is coming, and so is a recession.”)

The has closed lower in 9 of the last 10 weeks, with this week being the worst week YTD, yet metrics remain below the highs made on May 12, when the S&P touched a 14-month low and was (briefly) down more than 20% YTD.

Perhaps the market isn’t “worried enough” to have made a bottom.

The market cap of is down ~$23 Trillion from last November’s ATH of ~$100 Trillion. That’s equivalent to about one full year’s worth of US GDP.

The US dollar rallied against virtually all other currencies this week

My FX mantra for the past 40 years has been that capital flows to the USA for safety and opportunity. When markets are “worried,” the USD is bid. The “opportunity” in the USD now is higher interest rates and security in an appreciating currency.

The  was down again this week (down 14% YTD), hitting a new 20-year low due to ultra-loose BOJ policies. However, a rare joint statement of “concern” from the BoJ, the MoF and the Financial Services Agency late this week may presage a “change in tone” at next week’s BOJ meeting.

The  hit a 20-month low on May 12 (as the S&P hit a 14-month low and the USD made a 20-year high) and then rallied to nearly 80 cents over the next four weeks as the USD weakened, commodities (especially crude) and stocks rallied, and market sentiment shifted to risk-on.

The CAD fell nearly two cents this week as the USD surged (the euro plunged) and stock markets tumbled. The CAD weakness was sustained despite Canadian levels hitting a 46-year low of 5.1% and average wages growing ~4% YoY.

hit a new All-Time High of ~$2075 following the Russian invasion of Ukraine (and the subsequent sanctions), but dropped as much as $300 by early May as the USD strengthened and as interest rates (especially real rates) rose.

On Friday morning, gold dropped to a 3-week low on the CPI report but then rallied ~$50 to a one-month high even as the USD soared. It is unusual to see both gold and the USD enjoy a big rally on the same day—it is often a sign that markets are “worried.”

Given that gold has “held up” reasonably well despite the strong USD and the return of to positive territory, the purging of speculative interests may set the stage for another leg higher. 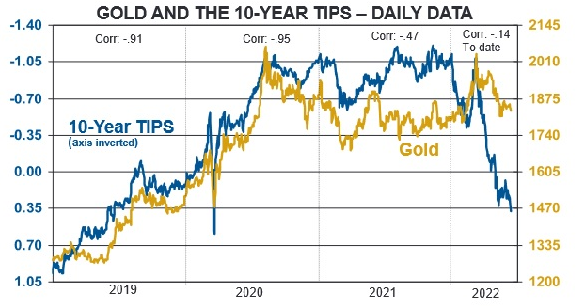 traded above $130 in early March (when gold was hitting ATH) for the first time since 2008. Prices dropped ~$35 following that spike but have been trending higher for the past two months, with this week’s close (on a continuous basis) the highest since 2008.

and  (lacking refining capacity) have been stronger than WTI futures and have recently traded at ATH.

While gasoline, diesel and crude oil prices have been the focus of media attention, North American prices have more than tripled from their average over the past five years. (The US is exporting LNG to Europe.)

With the yen at 20-year lows, the yen price of WTI crude has soared to an ATH.

I returned from a 5-day road trip on Monday afternoon, and it took me a few days to understand what to do in the markets. I shorted the Thursday morning and covered the position shortly after the CPI report Friday morning. I’m flat going into the weekend, and my P+L is up >0.50% on the week.

The possibility of Central Banks “tightening into a recession” sets the stage for “something” (or maybe several things) to break. I will look for opportunities in markets that have made strong one-way moves to reverse.

That doesn’t mean simply taking a counter-trend position, but if I see a trend break and a subsequent attempt to return to trend fail, I’ll get interested.

One of the best reasons I keep writing this blog is that it connects me with other traders I would not otherwise have met. When swapping emails with another trader, I usually keep the “message” short and to the point. Here are a couple of edited quotes (from me) to another trader this week:

My road trip caused a disconnect between me and the markets, which may be a good thing. My trading time horizon the past few months had become very short-term – day-trading – and historically, my strong suit has been a swing-trading time frame; a few days to a few weeks.

The short-term volatility in markets (particularly equity futures) “forced” me into a shorter-term time horizon.

So I’m back at my desk with a “clean sheet” in front of me. As a person with “multiple personalities,” I’ll be interested to see who shows up!

Interesting that you mention Cathie Wood. I saw a story about her maintaining that deflation is a bigger worry than inflation – that’s an interesting thought (especially if she’s right!)

The essence of what you’re doing (looking at market correlations, seeing a breakdown in CAD/WTI, and CAD/commodities – seeing the near-universal energy market bullishness) is classic Bruce Kovner: What I am really looking for is a consensus that the market is not confirming. I like to know that there are a lot of people that are going to be wrong.

Risk Management quotes from the Notebook

At that moment, I was confronted with the realization that I had blown a great deal of what I thought I knew about discipline. To this day, when something happens to disturb my emotional equilibrium and my sense of what the world is like, I close out all positions related to that event. Bruce Kovner, The Market Wizards, 1989

My comment: The Market Wizards is a must-read for traders, and the interview with Bruce Kovner is one of the best in the book. As I keep repeating, I make money from managing risk, not from having a great crystal ball. I know that things I can’t possibly anticipate can happen, so I need to do whatever I can to avoid taking a devastating trading loss.

Time and time again, when I read interviews with accomplished traders who are asked for advice for new traders, they say, keep your size small. That way, if you’re wrong, you don’t get killed.

Having a BIG position inevitably means you’ve got your ego tied up in the trade, and if it goes against you, you will either fight it or freeze—which is precisely the worst thing you can do.

Is The U.S. Already In Recession?

Is The U.S. Already In Recession?

Volvo dips in to Europe’s ‘seized up’ bond markets

When elites are too effective for their own good