by Pinchas Cohen
in Analysis
Reading Time: 3 mins read
A A

Recession worries continue to swirl, but the outlook remains upbeat for this week’s initial estimate of fourth-quarter GDP, based on a set of estimates compiled by CapitalSpectator.com.

The US economy is on track to grow 2.6% in the final quarter of 2022 (seasonally adjusted annual rate) via the median nowcast for the release scheduled for Jan. 26 from the Bureau of Economic Analysis. If accurate, output is set to extend a rebound in growth that started in Q3.

The upbeat Q4 estimate conflicts with signs from other indicators that paint a darker profile. The US Leading Economic Index (LEI), for example, fell further into the red zone last month. 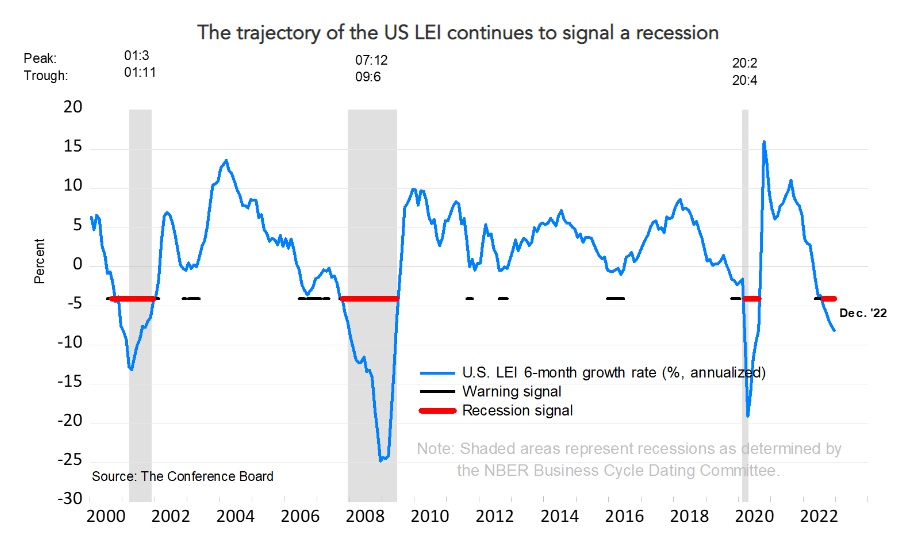 US LEI Vs. Recession Signal Vs. Warning Signal

Ataman Ozyildirim, senior director of Economics, at The Conference Board, said,

“The US LEI fell sharply again in December — continuing to signal recession for the US economy in the near term. There was widespread weakness among leading indicators in December, indicating deteriorating conditions for labor markets, manufacturing, housing construction, and financial markets in the months ahead.”

Note, too, that the , a GDP proxy, reflects negative business activity in December. Although this indicator is an outlier vs. other US nowcasts for Q4 activity, it’s a reminder that economic risk is elevated.

A similar warning has been flashing in a pair of proprietary business-cycle indicators highlighted in The US Business Cycle Risk Report. The Economic Trend Index and Economic Momentum Index continue to indicate a moderate contraction for the US. 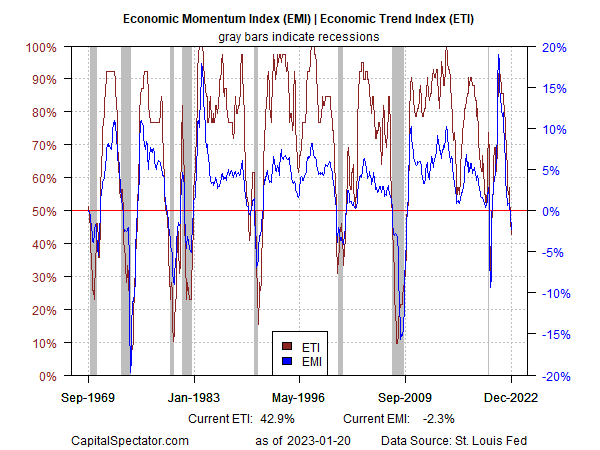 A notable exception to the gloomy numbers is the labor market. Although hiring is slowing, payrolls continued rising at a healthy pace in December.

As a result, the Conference Board’s Coincident Economic Index “has not weakened in the same fashion as the LEI because labor market-related indicators (employment and personal income) remain robust,” explains Ozyildirim.

The degree of conflicting economic signals is unusual, raising questions about the true bias in the economy. Perhaps Thursday’s report will bring some much-needed clarity.

Meanwhile, economic data remains mixed for nowcasting recession risk. There’s enough support to make a case one way or the other, but until the numbers tip further toward growth or contraction the debate will continue.

The uncertainty inspires labeling current conditions a “slowcession,” says Moody’s Analytics chief economist Mark Zandi. “With a bit of luck and some reasonably deft policymaking by the Fed, the economy should avoid an outright downturn.”

Asian stocks buoyed by China optimism ahead of Lunar New Year By Investing.com

Where are the Reliable Returns? Secrets to Achieving Better Investment Performance

Asia FX slips while dollar steadies ahead of CPI readings By Investing.com