Donald Trump has mocked, dismissed and railed against the FBI and US Department of Justice for the search of his Mar-a-Lago estate this week.

But the warrant that was presented to the former president’s attorneys to justify the swoop on his Florida home to retrieve boxes of classified documents he had retained since leaving the White House — and was unsealed on Friday night — showed that US enforcement authorities believe he may have committed crimes related to national security, the mishandling of government material and obstruction of justice.

“These potential charges are ultimately very real and very serious. They are felonies with potential sentences of many years in prison,” said Bradley Moss, a lawyer specialising in national security matters at law firm Mark Zaid in Washington.

One of the sections of law that the justice department cited as a reason for the search — which was endorsed by a federal judge — involves a possible violation of the Espionage Act, which was enacted by Woodrow Wilson in 1917 as America entered the first world war.

Over the years, it has been used to prosecute spies such as Julius and Ethel Rosenberg, who were executed in 1953 for being Soviet agents, and more recently, Edward Snowden and Chelsea Manning for leaking classified documents. But is has never before been invoked in the case of a former president — putting America in uncharted waters from a legal perspective.

“It’s unforgivable that the former president put the country in this position. It’s not just pieces of paper but pieces of paper that really are inherently dangerous,” said Harry Litman, a lawyer at Constantine Cannon and former federal prosecutor. “For example, perhaps there’s people out there who would get a glimmering that they’re there and would try to steal them. It’s a completely intolerable situation based on his wilful, petulant and completely recalcitrant conduct.”

Specifically, the search warrant says Trump may have violated section 793 — which relates to “gathering, transmitting or losing defense information” — as opposed to section 794, which refers to “gathering or delivering defense information to aid [a] foreign government”. During the Mar-a-Lago search, the FBI recovered a trove of classified documents, including some that were marked “top secret” and were supposed to be handled with special care in government installations.

Despite repeated efforts by the justice department to take them back from Trump in recent months, including by issuing a subpoena, the former president had resisted, creating a stand-off with law enforcement.

It is unclear what information the documents contained that is valuable to both Trump and the US government. But the law enforcement agencies also cited violations of two other statutes — one applying to the obstruction of justice, and another related to the mishandling of government property — which are also weighty and could put Trump in serious legal peril as he continues to debate whether to run for the White House again in 2024.

It is still unclear whether Trump will ultimately be charged with a crime — and which one. “You can make a straight face argument, and clearly the government has, that each of these statutes have been violated. But that does not mean in any way that there’s a plan or even a likelihood that charges will be pursued in a criminal case down the road,” said Daniel Richman, a professor at Columbia Law School.

US stocks record longest run of quarterly declines since 2008 crisis

“Not only would any decision about prosecution turn on the seriousness and importance to national security of the material, but you would need real clarity as to the intent and knowledge on Trump’s part about those materials,” he added.

Trump has insisted that the material was declassified before he left office — which would have been his prerogative while he was president. But that typically involves a lengthy process and authorities do not believe that is the case.

“That abstract constitutional obstacle to a prosecution is Trump’s best defence right now, and is something DoJ has to plan for as it contemplates an indictment and ultimately overcome in pre-trial motions if it does prosecute the former president,” said Moss at Mark Zaid. 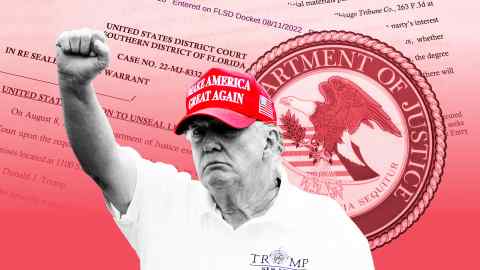 But even though the evidence does appear to be piling up in favour of a federal prosecution, Merrick Garland, the attorney-general, who on Thursday vowed to uphold the law “without fear or favour”, will have to make the decision about whether such a step would be justified and appropriate.

“The justice department may find itself with a fact pattern that definitely fits the evidence and law in terms of criminal prosecution, but it just doesn’t feel is grave enough for crossing the Rubicon of charging a former president,” said Litman at Constantine Cannon.

More than 1.8mn without power as Hurricane Ian batters Florida

Bitcoin Falls Below $19K, Near 2022 Lows as Fed Jitters Weigh By Investing.com

Bitcoin’s no longer the king of the swingers By Reuters