Week Ahead: Stocks Set To Resume Corrective Rally On Technicals

by Pinchas Cohen
in Analysis
Reading Time: 6 mins read
A A

Will investors maintain last week’s return to risk as the pushes its liquidation pedal harder this month? Investors will find that both stocks and bonds become heavier as the dollar supply shrinks, and given that the economy is already in a downturn, continued tightening increases the chances for a recession even the Biden Administration will find it difficult to deny.

The outperformed, rising 4.9%. However, in terms of the decline from the week that started Aug. 15, the is beating its peers, down only 5%, paring the 8.3% decline as of the previous week. Conversely, the two worst performers remain the and the 7.2% and 6.7%, respectively. This market paradigm is rational. Those last two are the most vulnerable when rates are on the rise. Investors are rotating out of big tech, which has maximized its return potential. They are dumping small companies, who don’t have the resources and flexibility to deal with a tightening economy as large caps do.

But why will Technology outperform last week? Because the market flipped. The most stretched snapped back the hardest. Also, the fell for the first week in four, after reaching a 20-year high and reaching levels against the not seen in 24 years. That 100% negative correlation is either a coincidence or causal.

Given that a stronger dollar hurts American exports and foreign investments, there’s reason to believe that a stronger dollar for the first three weeks weighed on equities and the weak dollar last week relieved that pressure. So, why would the dollar fall? Fedspeak was consistently pro further jump hikes, and rhetoric reiterated that inflation is still going strong and that policymakers will keep going for as long as necessary until they force inflation back down. In other words, there is no known fundamental reason for the dollar to back down, suggesting it declines in its haven status as investors increase risk.

If there is no known fundamental reason, let’s check out technical ones.

Support and resistance are functions of supply and demand. Chartists who follow trend lines create a self-fulfilled prophecy. Even fundamental analysts are humans. They remember that the price behaved in a certain way at a certain level, and that may influence an analyst’s decision-making process.

The following study of support and resistance I show you will probably represent the first time I have used it since the beginning of writing this column five and a half years and 2,313 articles ago – the Fibonacci indicator. I don’t incorporate it into my analysis because I don’t understand it. This mathematical sequence is found in many aspects of nature, and technicians, therefore, expect that it will also impact humans. I show it this time because it appears to be affecting the S&P 500 Index – consistently.

The bounce from the mid-June low to the mid-August high retraced to the 0.618 Fibonacci sequences (which coincided with the downtrend line), and last week’s bounce retracted – that’s right – from the 0.618 level. This measure is presumed to be the largest corrective move. If the price breaches it, the odds rise for a reversal. Interestingly, it may be a coincidence, but the gauge worked for the same level both ways. Perhaps Fibonacci followers are driving these moves. I have no other rational explanation.

Either way, the price gapped above the 50- and 100-day moving averages, giving bulls an edge, suggesting the price has room for a further corrective rally to the downtrend line, reinforced with the 200 DMA. Still, you’d be going against the primary trend, which is risky.

The dollar has fallen for three straight days for the first time in nearly a month, as some traders question whether the future hikes are already priced into the U.S. currency at a two-decade high. So, despite hawkish Fedspeak, this could be another reason why equities rally: the outlook of a weaker dollar. Let’s look at the technicals. 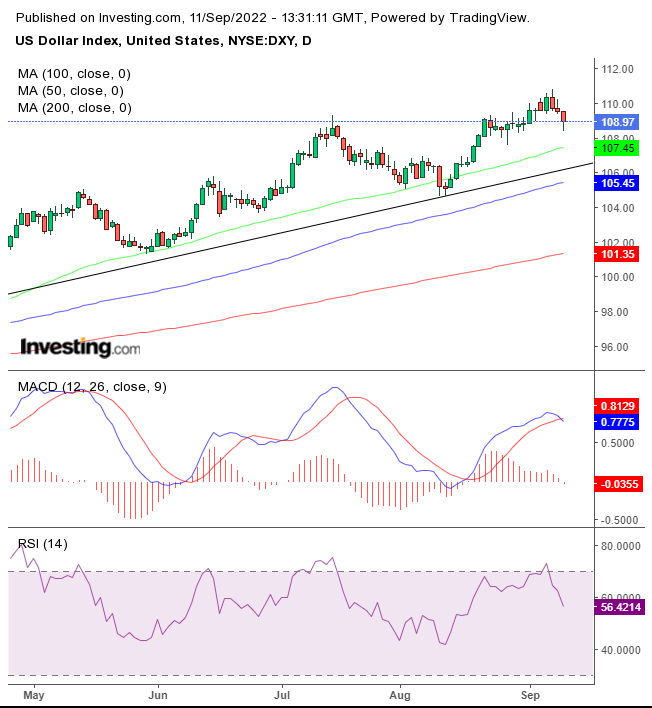 The dollar is still very much in an uptrend. We can see how far it rose above its uptrend line, increasing the chances for a pullback. However, note that the greenback closed well off its lows on Friday, having found support by the July 14 high. Still, there is room for concern. Both the moving average convergence-divergence (MACD) and the relative strength index (RSI) indicators triggered negative correlations, increasing the chances for a further drop. Both also provided bearish crosses. However, as aforementioned, the dollar is still in an uptrend and has room for correction, having risen far away from its uptrend line.

bounced last week, in a mirror image of the dollar, having neared not its previous July low but the lowest levels since April 2020. However, the chart signals a warning. 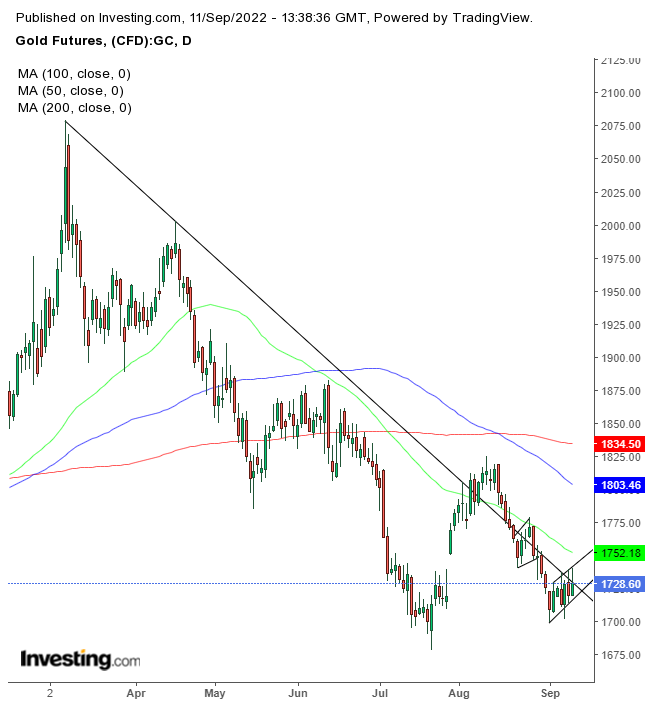 Gold might be forming a second consecutive rising flag, bearish after the preceding $80, in a straight five-day line down – the telltale sign of a rising flag. A downside breakout will imply an $80 target. Note how both flags formed precisely on the downtrend line, with which the price has struggled since August. 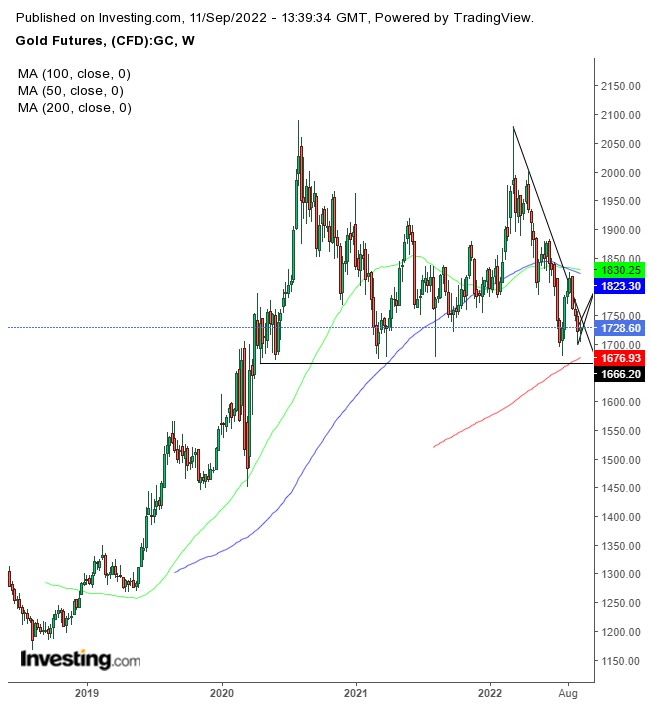 If that scenario follows through, gold will have breached its two-and-a-half-year support, topping out, implying another $400 drop.

U.S. Dollar Falls to a 6-Month Low as Investors Focus on Nonfarm Payrolls

In another show of correlation with risk, rather than haven, assets, jumped 8.8% in its first rise in four weeks. 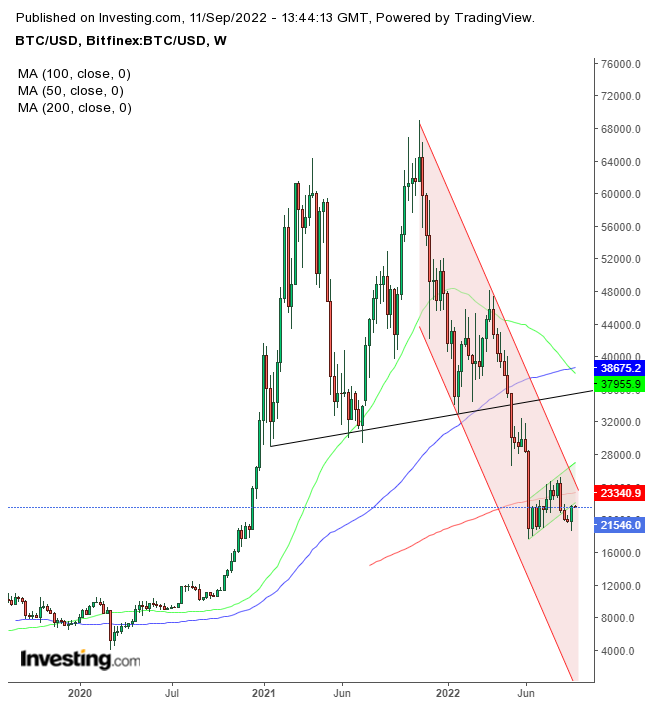 The price found resistance by the bottom of a failed rising channel, as the 200-week MA pierced through it, which bumped head with the main falling channel. The 50-week MA fell below the 100 WMA. BTC is set to extend another down toward . 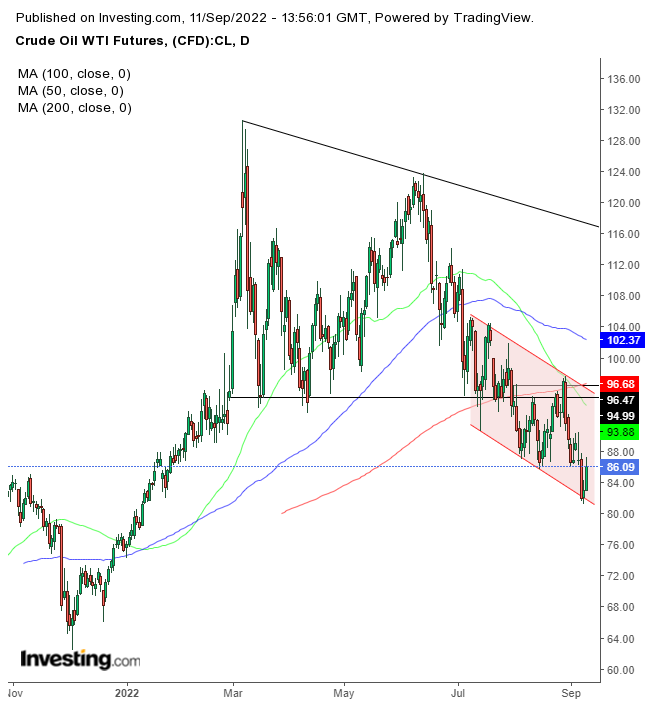 After completing a descending triangle, coinciding with a weekly death cross (when the 50 WMA falls below the 200 WMA, showing how pricing is breaking down broadly), the price bounced off the bottom of a falling channel, implying a .

Disclaimer: At the time of publication, the author had no positions in the securities mentioned.

Looking to get up to speed on your next idea? With InvestingPro+ you can find

And a lot more. Get all the key data fast so you can make an informed decision, with InvestingPro+. Learn More »

Canada’s real problem is not job losses, it’s the rush to retire By Reuters

King Charles seeks to fortify the UK with tour of nations

King Charles seeks to fortify the UK with tour of nations

We went too far in use of consulting firms By Reuters

Where Are The Trades? | Investing.com