Relatively quiet week for the British index, especially when to its peers.

The price seems to want to consolidate well above the strong support at 7.150: if this hypothesis is true, it would be a very optimistic figure in the short-medium term.

MACD and RSI, however, leave us slightly skeptical about the possibility of a short-term extension as they are both in negative territory.

We point out the strong depreciation of , which positively impacted the week’s performance.

Consolidation week for the Italian index, which we believe may be close to a strong price in the short term in both directions.

MACD and RSI are also reasonably neutral as the first is at the 0 levels and the second at 50. 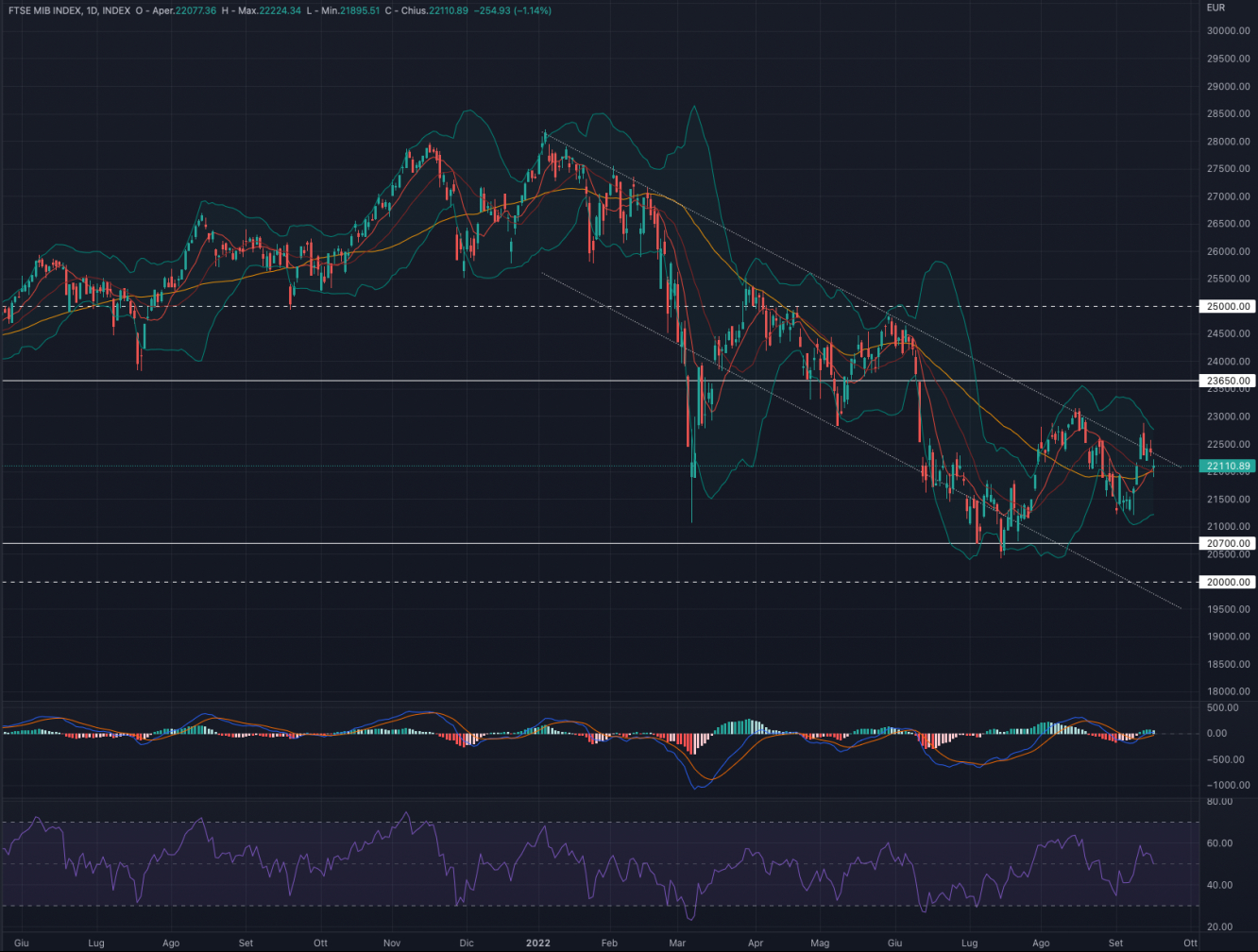 While we believe the recovery in July is very positive in the medium term, we believe it is appropriate to wait for price confirmation.

The price action from June till today has begun a progressive narrowing that will lead to a break up of 22.500 or a fall of 21.500.

We prefer to remain neutral on the FTSEMI and act accordingly on breaking one of the two levels.

Week that sees once again respecting the strong bearish trend line that started in January 2022.

The price is now near the strong support at 12.600, which we believe will again play the role of a reversal area. 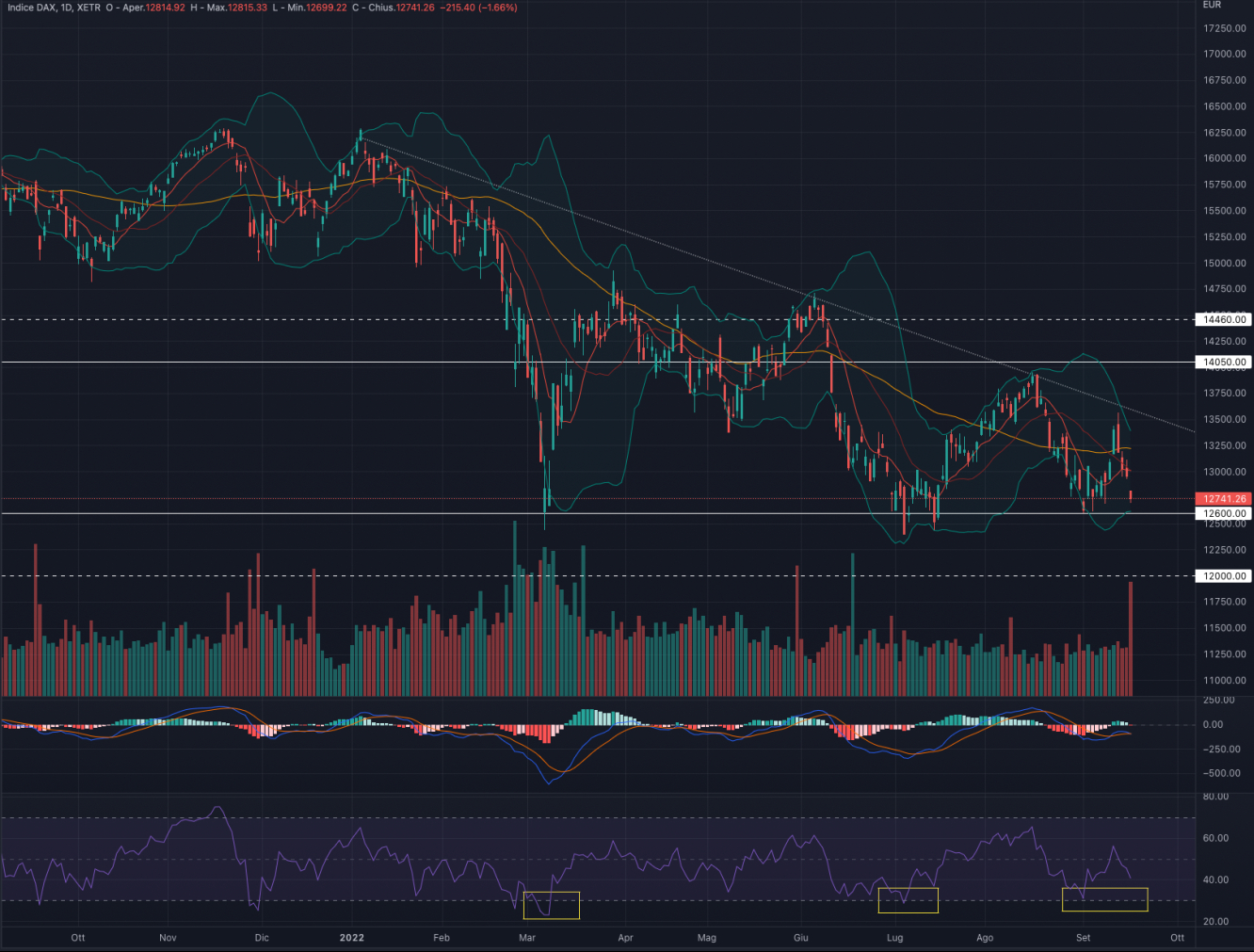 MACD and RSI are both negative, but we can see a positive divergence with the price action when this reached the support at 12.600.

We are currently still neutral on the DAX and in the process of considering long setups once we break above 13,250.

Week that saw the index test again the strong support at 3.830. Given the strong downward extension and near the bottom of the Bollinger Band, we believe there may be a short-term recovery of vigor. MACD and RSI perfectly describe the bearish period of the index, with the first below 0 and the second well below the 50 thresholds.

To understand when the price can begin the long-awaited upward recovery, we believe it is appropriate to rely on the breakdown of the bearish trendlines present on the index: the first we identify starting from August 16 (short term) and the second starting from January 2022 ( long period).

We remain neutral on the S&P 500 and are ready to consider long setups at breaking the short-term bearish trendline, which could come with consolidation above 4,000.

The week saw the Tech index being rejected by the 50-day moving average (yellow line), which confirms the negative period. 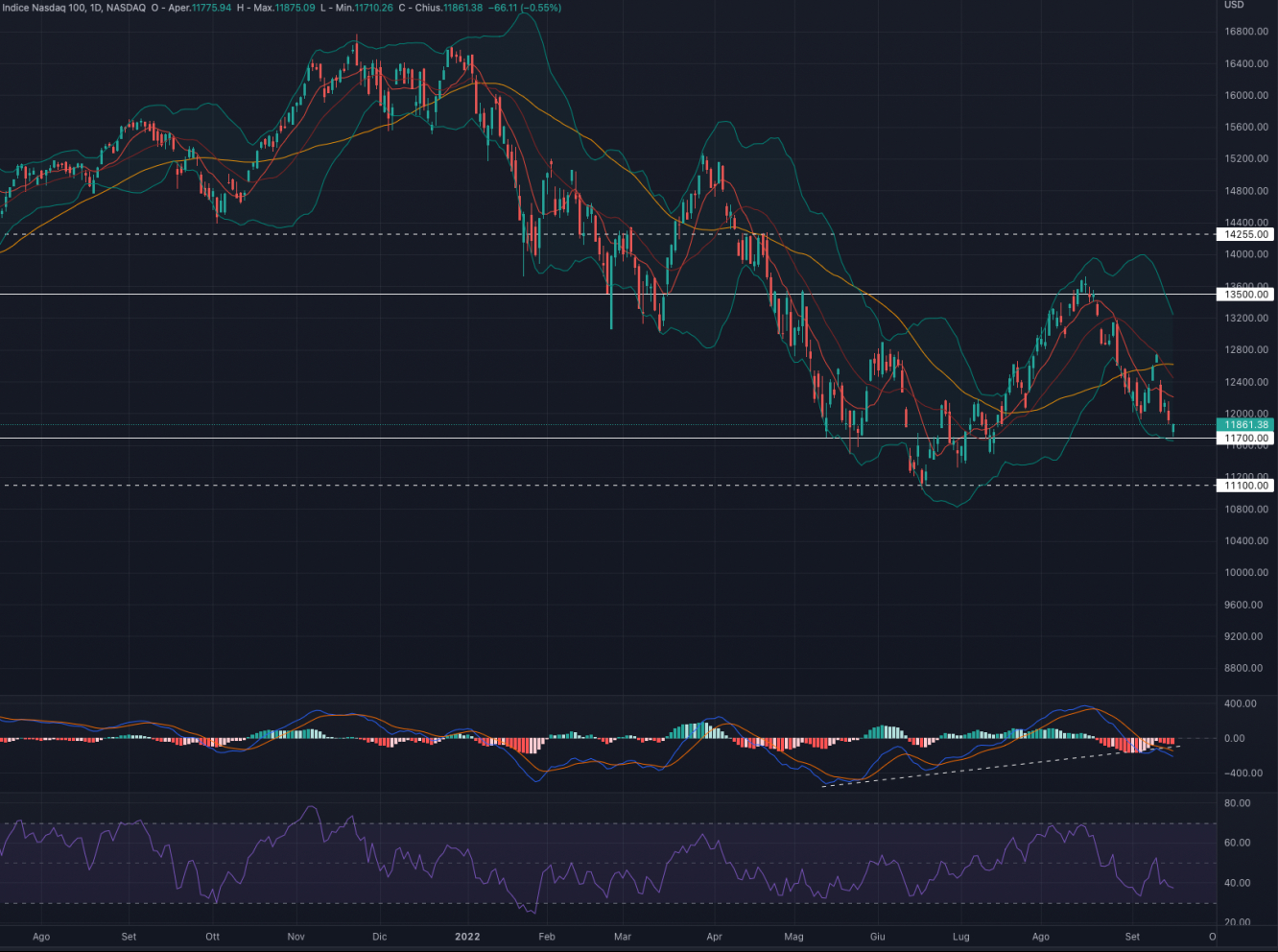 Taking into account, the price again started in May 2022. We can see a substantial lateral fluctuation of the NDX: having said that, combined with the reaching of the lower part of the Bollinger band, we can expect a slight bullish recovery in the short term.

MACD and RSI confirm the bearish period as they are both in negative territory: to be monitored if the former will remain above the bullish trendline that began in May 2022.

We remain neutral on the Nasdaq 100 stressing the momentary situation of uncertainty. It may be worth considering long setups if, by the end of next week, the price would close above the 12,000 level.

The week brings the American index back to the strong support at 30.600, which has played a few times the role of an upside reversal area. 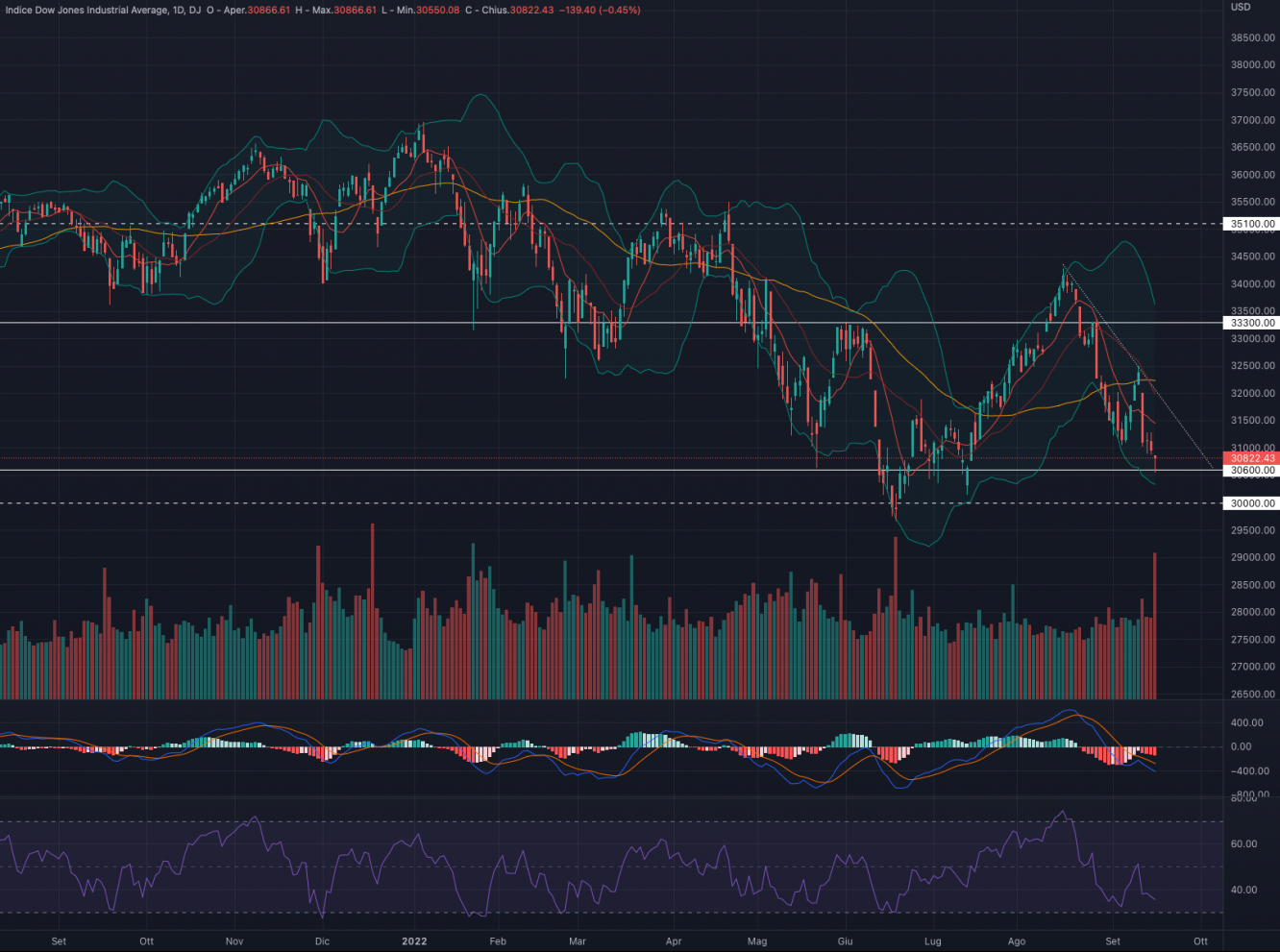 Although the trend remains downward, it is desirable to expect a recovery of strength in the short term given the concomitance of the strong support, the lower level of the Bollinger band, and a desirable Friday’s reversal candle.

The short-term bearish trendline, which began in August 2022, confirms that only a break of the 31.500 level could then lead to a subsequent much more marked recovery.

MACD and RSI confirm the negative period of the index, both finding themselves in bearish territory.

We remain neutral on the Dow Jones and are ready to consider long setups once the 31.500 level has passed.

Spotify to trim 6% of workforce, content head to depart By Reuters

Goldilocks and the three bears By Reuters