What Does China Recovery Mean for Semiconductors and the Global Economy?

by Pinchas Cohen
in Analysis
Reading Time: 4 mins read
A A

In this article, we dive into the state of the semiconductor industry and the impact that a recovery in China could have on semis and the broader economy. Interestingly China now represents only ~10% of semiconductor companies’ revenues vs. 20% pre-covid, implying that demand would need to double for the country to return to normalized levels.

Why Are Semis Important?

Semiconductors are used in a wide array of applications (data centers, autos, PCs, appliances etc.). Consequently, the demand trajectory for semis is a good proxy the direction of the global economy.

While consumer electronics is an important market today, most of the growth in the next 5 to 10 years is expected to come from computing & data center, wireless communications, and automotive.

Demand for semiconductors took a step down in May 22 and worsened in all regions as the year progressed. As an example, worldwide PC shipments declined 29% in 4Q22, with the US PC market declining 21%, EMEA 37% and Asia Pacific (ex. Japan) down 29%. Data center demand held up relatively better, but also softened in 4Q22. Interestingly, as we enter 2023, we are starting to note some signs of stabilization and a potential recovery.

The supply chain for semiconductors is very complex which makes it hard for manufacturers to have direct control over the supply. This results in inventory imbalances that can exacerbate weak demand, creating the first-in/first-out dynamic. Apparent demand is initially much worse than end demand as distributors work through inventory, but once inventory stabilizes, demand is aided by re-stocking.

TSMC is the largest manufacturer of semiconductors with 57% foundry market share. The company reported stronger than feared earnings last week, but more importantly pointed to “initial signs of demand stabilizations” and “healthy recovery in the second half of 2023”. TSMC expects revenue to decline mid to high single digits in 1H23, but the full year to be a slight growth.

What gives TSMC confidence in this projections? We believe it is China. Interestingly, since pre-covid, China declined from ~20% of TSM revenues in 2019 to only 11%. For China to return to a normalized ~20% of sales, demand would need to double in a 1-2 year time frame. This would mean 10%+ growth for the company in 1-2 years even if all other end markets are constant.

In addition, it is worth highlighting an interesting datapoint from Nvidia (NASDAQ:) management who noted that while the US hyperscalers are much larger scale than the Chinese hyperscalers, China has more consumer internet companies than the US. For comparison North America represented 68% of TSMC revenues in 2022, while China represented only 11%.

What Is Driving Re-Shoring for Semiconductors?

When it comes to semi-design and manufacturing, no region has end-to-end capabilities. Semis are designed by one company (e.g., Nvidia (NASDAQ:), AMD) in one region and fabricated by another company (e.g., TSMC) in another region. They are than assembled and distributed by third parties, which adds an incremental layer of complexity and inventory management challenges. This is one of the reasons why managing the supply of semis is difficult and inventory overbuilt can exacerbate an over-supply issue. 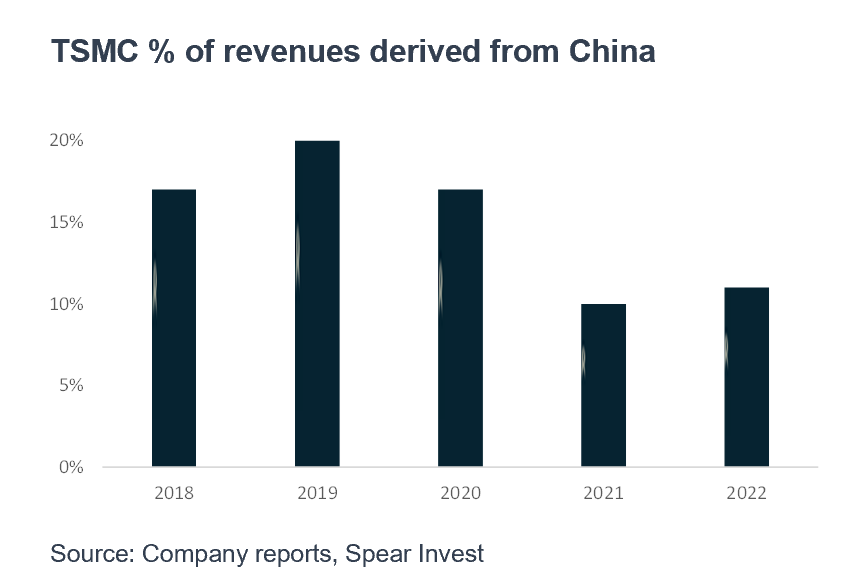 TSMC % of Revenue Derived from China

In addition, most of the world’s fabrication (>70%) takes place in one region, Taiwan, posing significant geopolitical risk. This is the reason why governments are pushing for localization of supply chains, even though the cost may be significantly higher. 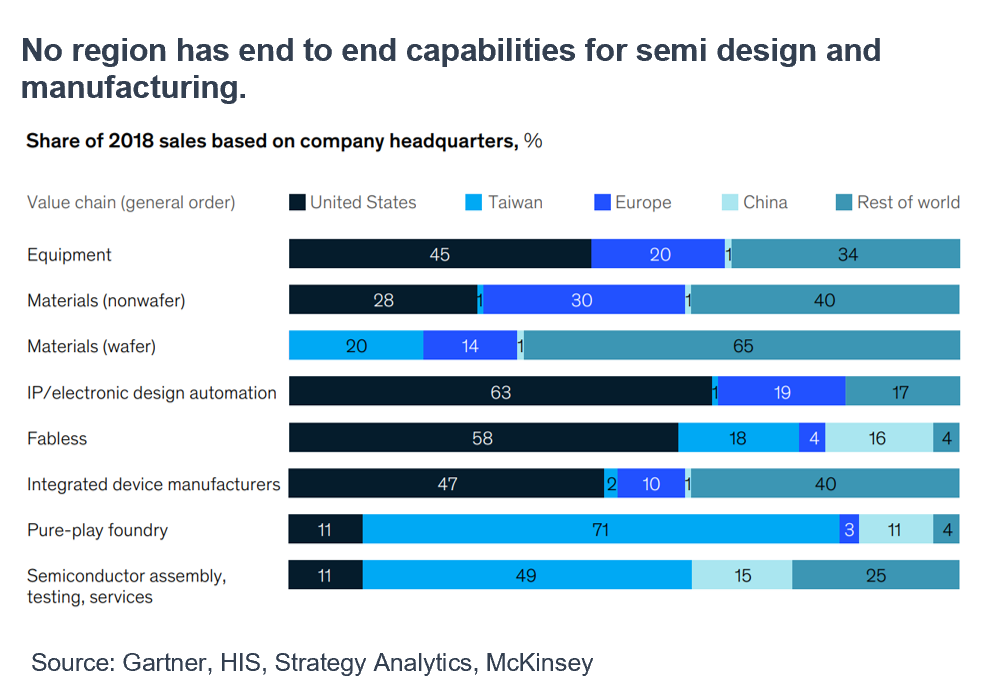 Chip design costs and fabrication have been increasing as chip sizes are declining. Designing a 5nanometer chip costs almost twice as much as the 7nanometer, and building a 5nanometer fab module costs close to doble that of a 7nanometer. In addition to the cost increase due to the improved technology, localization of supply chains is adding an incremental layer of cost. 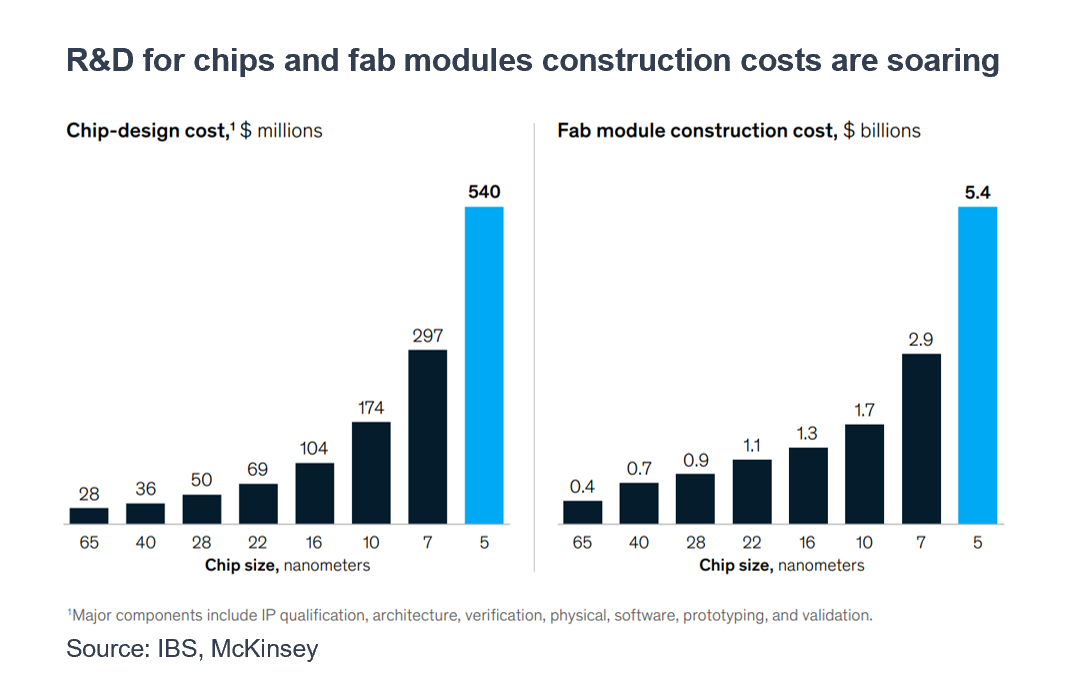 According to the semiconductor manufacturers, these cost increases will be more than offset by the benefits, and are proceeding with very large capex plans. TSMC, for example is planning to invest $40bn in the US for two 2 semi fab plants, Intel (NASDAQ:) will invest more than $30bn (up to $100bn) for two new factories, Samsung (KS:) planning to invest up to $200bn (11 factories). This level of investment is very impactful for the US economy and we expect it to provide support for industrial activity even in a slower macro environment.

DISCLOSURES: Views expressed here are for informational purposes only and are not investment recommendations. SPEAR may, but does not necessarily have investments in the companies mentioned. For a list of holdings click here.

Lagarde promises to ‘stay the course’ on high interest rates

Ethereum price rally under question after ETH slams into resistance at $1.6K By Cointelegraph

Ethereum price rally under question after ETH slams into resistance at $1.6K By Cointelegraph

ADA Is Resting on a Key Support Level, What Will Happen Next? By CoinEdition

Mexico Congress confirms Mejia to central bank board By Reuters

Crypto-asset manager Osprey Funds lays off most of its staff: Report By Cointelegraph