Why does Ukraine need longer-range weapons from the US?

The Biden administration announced late Tuesday it would send advanced longer-range rocket systems to Ukraine for the first time as part of $700mn in additional assistance to help the country fend off Moscow’s continued assault in the eastern Donbas region.

The supply of the weapons, which a senior administration official said would allow Ukraine to “more precisely strike key targets on the battlefield from a greater distance inside Ukraine”, will come as the US is trying to thread a careful needle in bolstering Kyiv’s defences without further inflaming tensions between Moscow and the west.

So what exactly are the rocket systems, and how are they likely to influence Ukraine’s strategy in the war?

What system is the US sending Ukraine?

These advanced systems are mobile launchers capable of striking targets from about 60km to nearly 500km away, depending on the type of ammunition used.

The US will initially send four of these systems, and training Ukrainian forces to use them will take at least three weeks, Colin Kahl, under-secretary of defence, said on Wednesday.

Senior administration officials said the US would also provide precision munitions known as guided multiple-launch rocket systems or GMLRS, which would allow Ukrainian forces to strike targets as far as 70km away. This would give them significantly more range than the Howitzers they are currently using.

Himars rely on a heavy truck to tow a launch pod that can hold six GMLRS, according to the US army.

Why does Ukraine want longer-range firepower?

Kyiv has long pleaded for systems that would allow it to engage Russian forces from greater distances, arguing that these are necessary to hold ground and launch counteroffensives.

In the past few days, Russia has made slow and incremental progress in and around the Donbas, and Ukraine has pressed for longer-range firepower to fend off Moscow in what has become primarily an artillery battle in the region.

The newly supplied US rocket systems have not just longer ranges but are also more powerful than the Howitzers, lethal drones and handheld anti-tank and anti-air missiles western countries have supplied so far.

“Our president has said many times, had we received these weapons before, the situation would be different with [fewer] occupied regions in the hands of Russia today,” Yuriy Sak, an adviser to Ukraine’s defence minister, told the Financial Times.

Why has the US debated sending these systems?

Officials in Washington are concerned that any strikes into Russian territory could expand the conflict or draw the US into it.

However, the US has received assurances that Ukraine will not use these systems to attack targets within Russia, secretary of state Antony Blinken said on Wednesday.

The Ukrainians have also asked Washington to provide longer-range missiles that can be used with Himars, known as the Army Tactical Missile System or ATACMS, which have a range of up to 300km. However senior administration officials said the US would not be providing these.

“We don’t want to take steps that widen the conflict and so some of the assurances that we’ve asked for in context of these particular systems are mindful of that, of not wanting these systems to be used to attack Russian territory,” Kahl said.

He added that the US had long discussions with the Ukrainians about what kind of munitions to provide, but assessed that the 70km GMLRS “could service any target that they needed, precisely”.

“We don’t assess that they need systems that range out hundreds and hundreds of kilometres for the current fight,” he said, adding that the US will provide more munitions as the fight goes on and will conduct a “rolling process” to assess whether Ukraine needs more Himars.

Analysts said that Ukraine could use the advanced rocket systems to gain an advantage in the grinding artillery battles in the Donbas region. 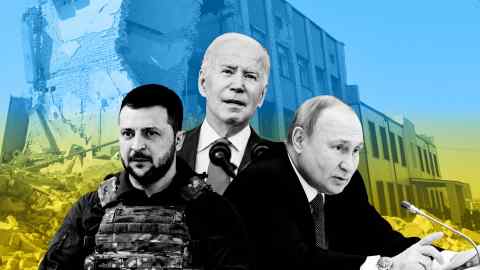 The systems provide a lot of firepower, which is particularly useful against enemy artillery, according to Mark Cancian of the Center for Strategic and International Studies.

“When enemy artillery units are located, it is essential to hit them quickly with a lot of fire,” he wrote. “Counterbattery fire [attacking enemy artillery] is important because the Russians have not been shy about employing their firepower and, consequently, Russian artillery has proven to be the major threat to Ukrainian forces.”

The US assistance package also includes counter-artillery radars, 15,000 more artillery rounds for the already provided Howitzers, and other aid.

The Himars have been pre-positioned in Europe and are expected to arrive in Ukraine in about a month, after Ukrainian forces complete their training. US officials declined to say where this training would take place, citing operational security concerns.

China ratchets up pressure on Taiwan after US congressional visit